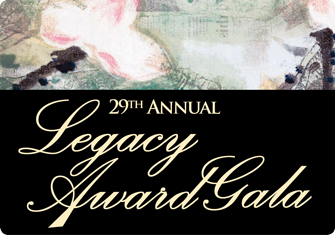 Vincent N. Parrillo, professor of sociology and director of the Paterson Metropolitan Region Research Center, will receive the Distinguished Faculty/Staff Service Award, given to faculty members in recognition of demonstrated career achievement and commitment to the University.

The gala is the Foundation’s largest event to raise funds to support the University’s mission of promoting student success and academic excellence through student scholarships.

“Support for the Legacy Award Gala can truly make a difference in the lives of our students, most of whom rely on scholarships to complete their studies,” says Richard J. Helldobler, University president. “All proceeds directly benefit student scholarships.”

“Our annual Legacy Award Gala provides us with a wonderful opportunity to honor the accomplishments of our dedicated alumni, faculty and friends of the institution,” says Pamela Ferguson, vice president for institutional advancement. “On behalf of the entire University community, I thank them for their partnership, leadership, and friendship.”

Burkhardt graduated with a bachelor’s degree in communication in 1997 and began his sports broadcasting career on the William Paterson campus, covering Pioneer athletic events for the University’s television station. He is the face of FOX Sports’ pre- and post-game coverage throughout the MLB regular season, post-season and World Series, and is a two-time Emmy winner as a studio host of the World Series on FOX. Burkhardt will also handle play-by-play duties for a select number of Tampa Bay Rays games this coming season on Fox Sports Sun. Burkhardt met his wife, Rachel Blanken Burkhardt ’98, on campus. They have a son, Logan, and currently reside in Los Angeles.

NK Architects, a New Jersey based regional design firm founded in 1972, has won awards for their designs on campus and will be honored as a Distinguished Organization. They began an ongoing relationship with William Paterson University in 2012 through the design and construction of University Hall. This transformational new academic building, designated as a LEED Gold building, was the first in a series of projects. Growing out of the success of University Hall, NK Architects was retained by the University to renovate and renew Preakness and Hunziker Halls, two of the oldest academic buildings on campus.

Parrillo is the author of a dozen books, including two of the nation’s leading college textbooks, and more than three dozen journal articles, with translations in nine languages. A Fulbright Scholar and Fulbright Senior Specialist, he went on dozens of speaking assignments for the U.S. Department of State and U.S. Department of Defense, and has lectured at dozens of universities in Asia, Canada, Europe, and the U.S. In addition, he is the executive producer, writer, and narrator of five award-winning PBS television documentaries about Paterson, N.J., including his most recent film, Paterson and Its People.

Tickets for the gala begin at $425; tables of 10 can be purchased for $5,000. The event begins at 6:30 p.m. and includes a cocktail dinner reception and presentation of the Legacy Awards and Viennese desserts. For reservations, contact the office for special events at 973-720-2478 or visit wpunj.edu/legacy.

William Paterson University is a leading public university in New Jersey with more than 10,000 students enrolled in undergraduate and graduate academic programs offered by five academic colleges: Arts and Communication, Cotsakos College of Business, Education, Humanities and Social Sciences, and Science and Health. Located on 370 hilltop acres in Wayne, the University offers a wide range of learning opportunities in its classrooms, laboratories and studios, and provides housing for nearly 2,700 students. The institution’s more than 400 full-time faculty are highly distinguished and diverse scholars and teachers, including 41 Fulbright scholars and recipients of numerous other awards, grants, and fellowships. The institution’s nearly 82,000 alumni can be found throughout New Jersey, the nation, and the world.