The institution showed progress in other rankings, including the Best Regional Universities North and Best Value Schools categories 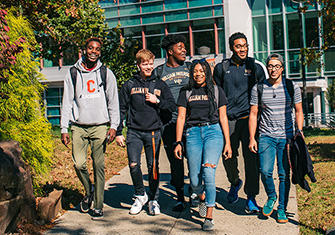 William Paterson University is once again among the top-ranked schools in its region in terms of its significant impact in providing an education for students who come from economically disadvantaged backgrounds, with a higher ranking than last year, according to U.S. News & World Report’s newly released 2023 edition of Best Colleges.

William Paterson ranks no. 21 among 175 regional universities in the northern United States on the Best Colleges list of top performers on social mobility, which measures how well schools graduate students with exceptional financial need. The University jumped 5 spots from no. 26 in the 2022 report, and from no. 38 in the 2021 report.

The University’s rankings in the 2023 edition of Best Colleges also include significant gains in other categories, including moving up 15 spots, to no. 75 from no. 90, in the Best Regional Universities-North category. William Paterson is also included on the Best Value Schools, Top Public Regional Universities North, Best College for Veterans lists, and is nationally ranked for its undergraduate nursing program.

In addition, William Paterson tied for no. 6 of the same 175 regional universities in the Best Colleges category of “campus ethnic diversity,” which identifies colleges where “students are most likely to encounter undergraduates from racial or ethnic groups different from their own.”

“Our University’s climb up the Best Colleges rankings is a testament to the great work being done across campus every day to support the success of William Paterson students,” says President Richard J. Helldobler. “I am proud of the achievements of our students, faculty, and staff, which are reflected in our largest gains in recent years in being recognized as a leading regional public university. Most importantly, they can be seen in our continued climb up the social mobility rankings, which are the truest measure of the life-changing power of a William Paterson degree.”

William Paterson University was also named to U.S News’s Best Values Schools list in the 2023 Best Colleges edition; the ranking factors academic quality and cost after accounting for total expenses and financial need. The University was ranked no. 67 in the Regional Universities North category.

William Paterson is also included on the Best Colleges list of Best Colleges for Veterans, ranked at 29 in its region. The list is designed to provide data on top-ranked schools that make pursuing a college education more affordable for veterans and active-duty service members. In addition, William Paterson’s undergraduate nursing program was ranked no. 247 out of 681 BSN programs nationwide, jumping 141 spots from its ranking of 388 in 2022.

William Paterson University is among the national leaders in helping its students climb the socioeconomic ladder. It ranks in the top 3 percent of 1,549 institutions in the country in the 2021 Social Mobility Index, created by CollegeNet to measure the extent to which a college or university educates more economically disadvantaged students at lower tuition and graduates them into good-paying jobs.