Award-Winning Author, Columnist, and Political Analyst Jonathan Alter to Give Commencement Address and Receive Honorary Doctorate on May 15 at The Prudential Center 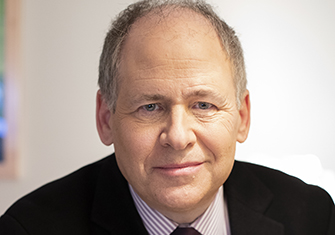 Jonathan Alter, an award-winning author, columnist, and political analyst, will give the keynote address at William Paterson University’s 2019 undergraduate commencement ceremony on Wednesday, May 15. The ceremony will be held at 9 a.m. at the Prudential Center in Newark. Alter also will receive an honorary doctor of humane letters degree.

Fred Gruel, a member of the William Paterson Board of Trustees, will receive the President’s Medal. Gruel, the retired president and CEO of AAA New Jersey automobile club, has served on the Board of Trustees since 1992, and has twice served as chair of the board, from 1996 to 2000 and from 2012 to 2018.

Alumni from the Class of 1969, who graduated when William Paterson was called Paterson State College, will be present at the undergraduate ceremony along with members of the Pioneer Society, those alumni who graduated at least 50 years ago.

Alter is an award-winning author, political analyst, documentary filmmaker, columnist, television producer, and radio host. He is the author of three New York Times bestsellers: The Center Holds: Obama and His Enemies(2013), The Promise: President Obama, Year One(2010) and The Defining Moment: FDR’s Hundred Days and the Triumph of Hope(2006), also one of the Times’Notable Books of the year. Since 1996, Alter has been a contributing correspondent and political analyst for NBC News and MSNBC. A specialist in the American presidency, he has interviewed seven U.S. presidents as well as many other heads of state.

After 28 years as a columnist and senior editor at Newsweek, where he wrote more than 50 cover stories, Alter is now a columnist for the Daily Beast and the co-host, with his wife, Emily Lazar, and their three children, Charlotte Alter, Tommy Alter, and Molly Alter, of “Alter Family Politics,” which airs Thursdays at 10:00 a.m. on RadioAndy on SiriusXM 102. In 2019, he co-produced and co-directed the HBO documentary, Breslin and Hamill: Deadline Artists.

Alter has written for the New York Times, Washington Post, Washington Monthly, Rolling Stone, The Atlantic, The New Yorker, Vanity Fair, The New Republic, Esquire, Bloomberg View, and other publications. His other books include Between the Lines: A View Inside American Politics, Media, and Culture, a collection of 20 years of his Newsweek columns, and Inside the System, a collection of Washington Monthly articles for which he was coeditor.

His many awards include first prize from the National Headliner Awards for Special Column on One Subject for a series of columns on life after 9/11, the John Bartlow Martin Award for his reporting on the death penalty, and the Gerald Loeb Award for Distinguished Business Reporting. He was also part of the teams of Newsweek reporters and editors awarded the prestigious National Magazine Award for General Excellence in 1993, 2002, and 2004. During the 2013-14 season, he served as an executive producer of Alpha House, a 21-episode, half-hour political comedy available on Amazon. He is currently at work on a full-length biography of former President Jimmy Carter. A native of Chicago, Mr. Alter received a bachelor’s degree in history with honors from Harvard University. He is a resident of Montclair.

Gruel retired in 2013 as president and chief executive officer of the AAA New Jersey Automobile Club and its subsidiaries, the AAA New Jersey Insurance Agency and the AAA New Jersey Car Care Center, after more than three decades with the company. He began his AAA career in 1980 and assumed various positions with increasing responsibilities. Appointed to AAA’s board of trustees in 1985, he was named president and chief executive officer in 1993. Under Gruel’s leadership, the organization thrived, experiencing significant growth in membership, staff, and revenue, as well as innovative product and service offerings.

Taking AAA’s century-old advocacy tradition to heart, Gruel has been a strong supporter of travelers’ rights, as well as the safety of drivers, passengers, and pedestrians. Through his leadership, key legislative initiatives have been passed, including graduated driver’s licensing, occupant protection, child passenger safety, auto insurance reform, and transportation funding.

Prior to AAA, Gruel held several positions in higher education, including vice president of administration and finance at Thomas A. Edison State College, assistant director of the Office of Community College Programs for the State of New Jersey’s Department of Higher Education, and the Board of Higher Education, City University of New York.

In 2017, Gruel and his wife Susan made a generous donation to William Paterson University to establish the Frederick and Susan Gruel Endowed Scholarship Fund. The scholarship will support a full-time first-generation student at the University who demonstrates academic excellence and financial need.

William Paterson University is a leading public university in New Jersey with more than 10,000 students and 78,000 living alumni. The third oldest public institution in the state, the University was chartered in 1855 and offers undergraduate, graduate and doctoral degree programs through five academic colleges: Arts and Communication, Cotsakos College of Business, Education, Humanities and Social Sciences, and Science and Health. Located on 370 hilltop acres in Wayne, the University provides a wide range of learning opportunities in its classrooms, laboratories and other state-of-the-art facilities, as well as other opportunities including research collaborations with faculty, internships and civic engagement activities. The institution’s more than 400 full-time faculty are highly distinguished and diverse scholars and teachers, including 41 Fulbright scholars and recipients of numerous other awards, grants, and fellowships.