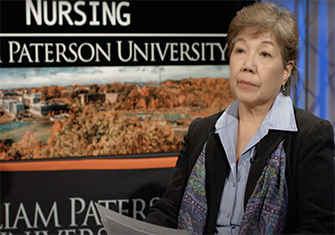 Members of WP's nursing department, who have all been vaccinated against COVID-19, gather at the awards gala

Four professors in William Paterson University’s nursing department were honored by the Institute for Nursing at the 2021 New Jersey State Nurses Association CARES (Clinical, Administration, Research, Education and Support) Awards held last week. The awards honor outstanding nurses who are nominated by their colleagues, who have the opportunity to observe their dedication to advancing the nursing profession.

WP professor and nursing graduate director Kem Louie was named Nurse Educator of the Year, after having been nominated by a former graduate student who is now a faculty colleague—“a special honor,” she says. “I have been at William Paterson University teaching in the undergraduate, masters and doctoral programs for 21 years. I believe that teaching is more than imparting knowledge; rather, it’s inspiring change.”

Second honorable mention in that category went to professor and WP graduate Sandra Foley, DNP ’19 chair of the Institute for Nursing, who was also recently named president-elect of the New Jersey State Nurses Association (NJSNA). She brings more than 30 years’ nursing experience in the acute clinical care setting to the role. The current NJSNA president is also a WP professor: Mary Ellen Levine.

“I feel privileged to be amongst such greatness in the William Paterson University Department of Nursing,” Foley says.

Adjunct Professor and WP graduate Elisa Green, DNP ’20, who works as a nurse practitioner covering corporate health and primary care services in Saint Clare’s Health, was named Clinical Nurse of the Year. A “very proud graduate of this wonderful institution,” Green credits the University’s nursing staff for becoming a family that has supported her personally professionally. “It is an honor to be a graduate of William Paterson University and to work with so many wonderful dedicated nurses and educators,” she adds. Green was recently inducted as president of the Philippine Nurses Association of New Jersey, Morris County subchapter.

Second honorable mention for Nurse Administrator of the Year went to adjunct professor Uma Venugopal, an administrative supervisor and drug diversion lead for Saint Peter’s University Hospital in New Brunswick, who was recently inducted as president of the American Association of Indian Nurses of New Jersey, Chapter 2. She is also an active member for the American Nurses Association mentorship program, among other professional and community service undertakings.

More than a dozen WP nursing professors attended the ceremony in Edison, New Jersey to support the awardees. Nursing department professor and chair Leo-Felix Jurado served as master of ceremonies for the gala.