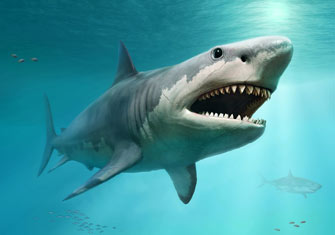 A depiction of a megalodon shark 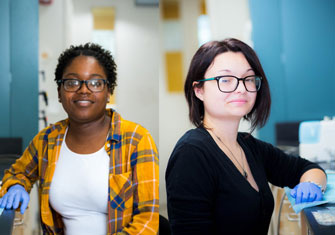 A team of William Paterson University researchers is garnering international press attention for their study on megatooth sharks, which made the cover of Science Advances last month.

The group's study finds that extinct megatooth sharks were the most dominant predators since the dinosaur, holding a higher rung in the marine food chain—what scientists call the highest “tropic level”—than any other known marine species, extinct or living.

To reach their conclusion, the team of researchers used a novel technique to measure the nitrogen isotopes in the sharks’ teeth. Ecologists have long known that the more nitrogen-15 an organism has, the higher its trophic level, but scientists have never before been able to measure the tiny amounts of nitrogen preserved in the enamel layer of these extinct predators’ teeth.

Teeth are more easily preserved than bones because they are encased in enamel, a rock-hard material that is virtually immune to most decomposing bacteria. Since shark teeth are so abundant and are preserved so well, the nitrogen signatures in enamel are a perfect way to measure status in the food chain, whether the tooth fell from a shark’s mouth millions of years ago or yesterday. 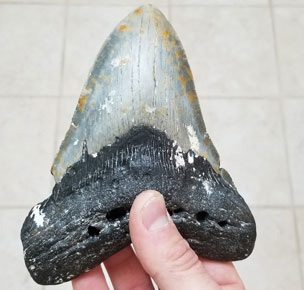 A megalodon tooth found by Harry Maisch in
North Carolina

The team’s database included existing literature, samples of shark teeth from aquariums and museums, and fossil megalodon teeth discovered by William Paterson professors Becker and Maisch on the sea floor.

“It’s really dangerous; Harry [Maisch] is a dive master, and you really need to be an expert to get these,” Griffiths says. “You can find little shark teeth on the beach, but to get the best-preserved samples, you need to go down to the bottom of the ocean. Marty [Becker] and Harry have collected teeth from all over the place.”

Aside from the WP alums, Griffiths also served as a mentor for another co-author on the paper, Princeton’s Alliya Akhtar, who worked with Griffiths for her doctoral dissertation, exploring the isotopic composition of seawater over the last 100 million years. A 2021 PhD graduate of Princeton, Akhtar is now a postdoctoral researcher in Griffiths’ lab.

“The work I did for my dissertation posed as many (or perhaps more) questions than it answered, and I was incredibly grateful to have the opportunity to continue working on some of these with a collaborator/mentor I respect,” Akhtar wrote in an email to Princeton. “I’m most excited about all the work that is still to be done, all the mysteries yet to be solved!” 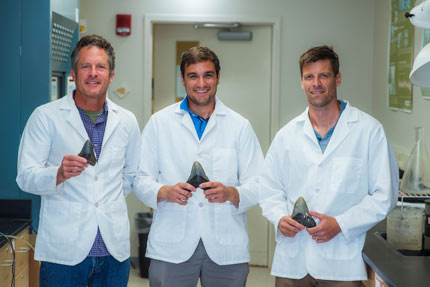 Most of the research conducted via William Paterson University for this study, including that performed by the students, was funded through grants from the National Science Foundation.

A recent episode of the National Science Foundation podcast series The Discovery Files, titled A Mega Predator of Predators, also features this research.