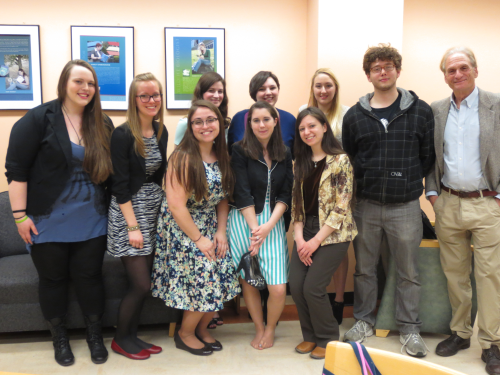 The performing and Literary Arts Track is a cross-disciplinary program for students interested in one or more aspects of creative accomplishment.

Students may focus on any of the creative arts, such as creative writing (fiction, poetry, playwriting), film-making, music composition/performance, visual art, photography, acting - or any combination thereof such as visual art and writing, musical composition and writing, photography and poetry, etc. The outcome will be a completed artifact and a public performance, held on campus and open to the college community and the community-at-large.

As is true for the other tracks in the University Honors College, Performing and Literary Arts is not a major, but a distinctive set of courses that adds breadth to, and reinforces, a student's chosen major. With the approval of the Track Director, each student selects five courses to assist him/her in both the preparation of the creative project and the formal presentation thereof. One of the five courses will be the PLA Thesis course in the student's final year. During this course, the student will develop and complete his/her project.

What projects have students completed in the past?

Students in the Performing and Literary Arts Track have produced theses with the following titles:

How do I enroll?

To enroll in the Performing and Literary Arts Track, contact the Director, Dr. Philip Cioffari, at (973) 720-3053 or at cioffarip@wpunj.edu. You could also contact Jan Pinkston at (973) 720-3776 or at pinkstonj@wpunj.edu. A completed track application must also be submitted to the Honors College.

About the Track Director:

Philip Cioffari is the author of three books of fictions: the mystery/thriller, Catholic Boys; the short story collection, A HISTORY OF THINGS LOST OR BROKEN, which won the Tartt Fiction Prize and the D.H. Lawrence Awards for fiction; and, most recently, JESUSVILLE. His short stories have been published widely in commercial and literary magazines and anthologies, including North American Review, Playboy, Michigan Quarterly Review, Northwest Review, Florida Fiction, and Southern Humanities Review. He has written and directed for Off and Off-Off Broadway. His Indie feature film, which he wrote and directed, LOVE IN THE AGE OF DION, had won numerous awards, including Best Feature Film at the Long Island Int’l Film Expo, and Best Director at the NY Independent Film &Video Festival. He is a Professor of English, and director of the Performing and Literary Arts Honors Track, at William Paterson University. www.philipcioffari.com